Hey Everyone! Here are the official English light novel releases you can look forward to in December (and there’s lots of them). 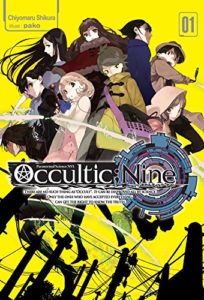 Q: Do you believe in ghosts?
A: Of course not!

Yuta Gamon, a young boy who lives in Kichijoji, runs an occult blog called “Kirikiri Basara.” He spends his days dreaming of making a fortune off his affiliate links. What starts off as a tiny feeling that something’s wrong develops into a case that goes beyond imagining. Suddenly, Yuta brings together the fates of nine strangers.

The world is filled with flim-flam!

This is first book in the Paranormal NVL Occultic;Nine series, from the mind behind Steins;Gate and Chaos;Child! Now a hit anime, too! 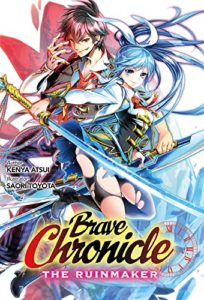 Meet Kurono Kokuya, a student in the lowest rank at Star Gate Academy — the world’s cutting-edge training facility for starcerers, the beings who use starcery to protect the Earth from otherworld invasions. His childhood friend Yukihime Yukigane just happens to be the world’s strongest starcerer, and she never lets him forget that fact. One day, their days of peace are interrupted by a powerful threat from another world. Kokuya and Yukihime stand on the front lines, risking their lives to protect those they love, but will they be able to defeat the Dark Lord Redge and his cruel minions?

“Fine, fine, I’ll protect the world with you…”

My Big Sister Lives in a Fantasy World Volume 1 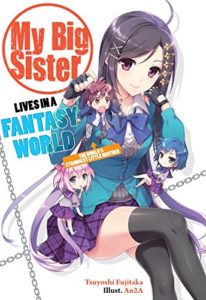 One day out of nowhere, high schooler Yuichi Sakaki begins seeing words above people’s heads. It turns out to be the ability to see people’s true natures, which he names… Soul Reader!

(Actually, his big sister names it that.)

The next thing he knows, he’s surrounded by people with bizarre labels like “Zombie” “Vampire” and “Witch.” And before he can figure out what to do about that, he finds himself threatened by a beautiful girl, Natsuki, whose label is “Serial Killer”!

Fortunately, Yuichi is not unprepared. His big sister has been training him for this kind of thing all his life. The battle is about to unfold between the bloodthirsty killing machine… and the world’s strongest little brother!

Purchase My Big Sister Lives in a Fantasy World Volume 1 from Amazon.com 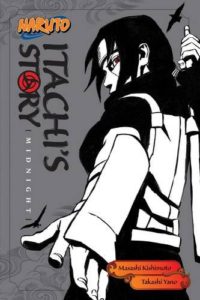 Together with his sworn friend Shisui, Itachi takes on a mission to assassinate a spy in the village in order to join the Anbu. The rivalry between the Uchiha clan and the village grows ever more fierce, until finally death comes for his friend. Despairing at both his clan and the village, Itachi heads into the tragic night with his new eye and a fatal resolve. The hope and the dreams he spoke of to his brother… The gentle yet cruel truth awaits.

Grimgar of Fantasy and Ash Volume 1 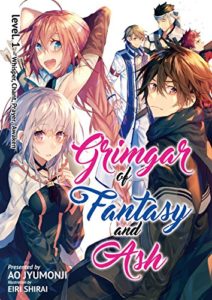 Why are we doing this…?

When Haruhiro came to, he was in the darkness. Not knowing why was he here, or where “here” even was. With him were others who also remembered little more than their own names. What they found when they came out of the underground was a world that was “just like a game.” In order to survive, Haruhiro forms a party with others in the same situation as him, learns skills, and takes his first steps forward into the world of Grimgar as a trainee volunteer soldier.

Not knowing what awaits him… This is a tale of adventure born from the ashes.

Purchase Grimgar of Fantasy and Ash Volume 1 from Amazon.com 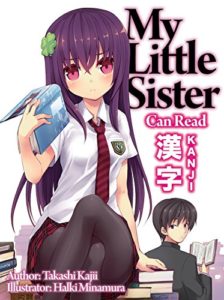 The year is 2202, and Japan has become the land of moe. Aspiring author Gin Imose and his little sister Kuroha are traveling to TOKYO to meet with the world famous author, Gai Odaira. Kuroha is uninterested in his orthodox literary style, and amazingly is able to read ancient modern Japanese books written in kanji!

This fateful encounter sets off a chain of events that could change the course of literary history. Could it be that, long ago, books could be about more than little sisters showing their panties and getting in compromising situations with their non-blood-related older brothers? Impossible! It’s hard to even imagine a Japan where everyone could read kanji and the Prime Minister was a 3D human being…

Purchase My Little Sister Can Read Kanji Volume 1 from Amazon.com 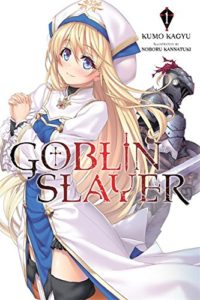 A young priestess has formed her first adventuring party, but almost immediately they find themselves in distress. It’s the Goblin Slayer who comes to their rescue–a man who’s dedicated his life to the extermination of all goblins, by any means necessary. And when rumors of his feats begin to circulate, there’s no telling who might come calling next… 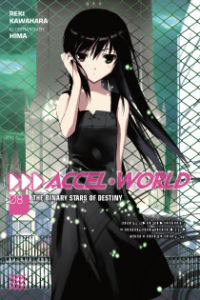 Haruyuki’s desperate battle with his friend Takumu has taken him to the brink, and he finally activates the Destiny, a purified version of the notorious Armor of Catastrophe. It’s light versus dark as their fierce fight continues, and the stakes couldn’t be higher. If Haruyuki can’t rid his friend of the sinister ISS kit that’s infected him, Takumu could be lost to the darkness forever. And he just might take Haruyuki with him…

The Asterisk War: The Academy City on the Water, Vol. 2 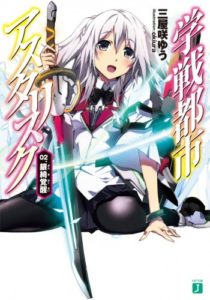 Having formed their tag-team partnership, Ayato and Julis begin polishing their skills and their teamwork in preparation for the Festa. But soon Ayato meets another girl–Kirin Toudou. She has long, silver hair and a petite charm–and despite her thirteen years of age, she’s one of the strongest fighters of Seidoukan Academy. She seems to like Ayato, but that’s not going to stop her from challenging him to a duel… 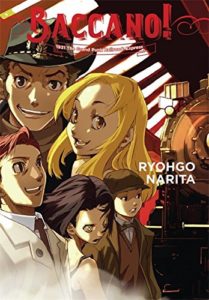 The year is 1931. A boy boards a train to visit his friend in New York. A woman in a jumpsuit boards a train to meet her employer in New York. And the conductor? He boards because it’s his job. If it had been any other day, they all would have gotten where they were going just fine. But it’s not any other day. The Rail Tracer is on the hunt. The gonzo tale of gangsters, immortals, and outrageous luck (both bad and good) speeds into its third volume! 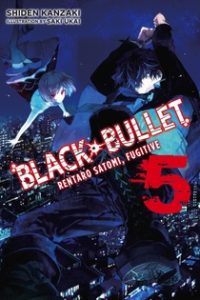 With the chaos of the Third Kanto Battle subsiding, peace is finally returning to the Tendo Civil Security Agency, and Rentaro, Kisara, Enju, and Tina are taking full advantage of the quiet. But when an old friend from Rentaro’s childhood reappears, their bright days turn suddenly dark–and Rentaro finds himself imprisoned for a senseless murder. He plans a desperate escape, but his enemies keep coming, and they are like nothing he’s ever fought before…

The fast-food joint that the Devil King calls his workplace has reopened, now with a hip café space upstairs–the perfect chance for the overlord of all demons to earn a few new certifications and work his way up to management. Meanwhile, Chiho, whose love for the Devil King remains doggedly unrequited, discusses ways with Emi to learn how to master the Idea Link, a skill that could let her telepathically communicate across worlds and call for help whenever she makes contact with a nefarious demon…or angel, for that matter. Suzuno steps up to serve as her teacher…but her choice of training areas (a public bath) leaves the others to question her sanity. It’s the sixth volume of this low-wage high fantasy, where soap bubbles fly and everyone may come out less than squeaky clean!

Purchase The Devil is a Part-Timer Vol. 6 from Amazon.com 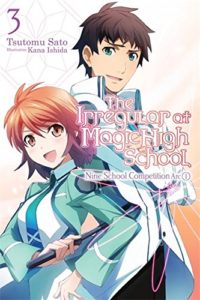 The Nine School Battle. Ever year in mid-July, students from magic high schools all over the country gather to participate in fierce competitions of magical skill. Miyuki Shiba is among the members of the team First High will send to the battle. The magical skill of the competitors will be a huge factor, but there’s another one-the tuning of their CADs. Luckily, they’ve got someone with them who specializes in the field-Miyuki’s older brother Tatsuya. But when the Nine School Battle is targeted by a sinister group, all the talent in the world may not be enough to secure victory…

Purchase The Irregular at Magic High School, Vol. 3 from Amazon.com

Is It Wrong to Try to Pick Up Girls in a Dungeon?, Vol. 7 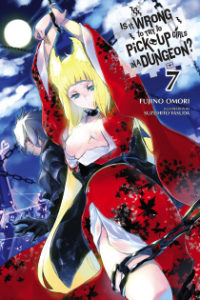 Having triumphed in the War Game, Lilly, Welf, and Mikoto have forged new bonds with each other and with Bell, and the new-and-improved Hestia Familia is feeling distinctly more familial. But when Bell has to venture into the pleasure quarter of Orario to come to Mikoto’s aid, he’s soon tangled up in more intrigue than he bargained for. Ishtar Familia owns the night here, and none of Bell’s experience can prepare him for their courtesan wiles!

Purchase Is It Wrong to Try to Pick Up Girls in a Dungeon?, Vol. 7 From Amazon.com

In the world of Disboard, everything is decided by games. Since arriving in this strange place, genius gamer siblings Sora and Shiro have risen to become king and queen of what’s left of Disboard’s humans. Their latest challenge is winning an unwinnable romance game against the races of Dhampir and Siren. To uncover the true strategy to beat this sadistic game of love, they head for the home of the angelic Flügel: the midair city of Avant Heim. But the Flügel are a hideously powerful race, created specifically to kill gods. Will things really go as planned?

Purchase No Game No Life Vol. 5 from Amazon.com 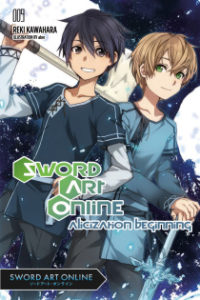 Kirito awakens in a vast, fantastical forest filled with towering trees. In his search for clues to the truth of his surroundings, he encounters a young boy who seems to know him. He ought to be a simple NPC, but the depth of his emotions seem no different than a human. As they search for the boy’s parents, Kirito finds a peculiar memory returning to him. A memory from his own childhood, of this boy and a girl, too, with golden hair, and a name he should have never forgotten–Alice. 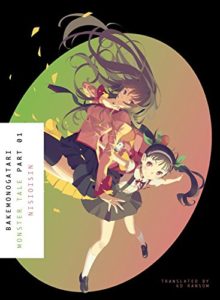 There’s a girl at their school who is always ill. She routinely arrives late, leaves early, or doesn’t show up at all, and skips gym as a matter of course. She’s pretty, and the boys take to whispering that she’s a cloistered princess. As the self-described worst loser in her class soon finds out, they just don’t know what a monster she is.

So begins a tale of mysterious maladies that are supernatural in origin yet deeply revealing of the human psyche, a set of case files as given to unexpected feeling as it is to irreverent humor. So begins the legendary novel that kicked off the MONOGATARI series, whose anime adaptations have enjoyed international popularity and critical acclaim.

This first of three parts introduces Senjogahara and Hachikuji, and fans of the blockbuster prequel KIZUMONOGATARI will be delighted to meet their favorite crazies again: the weirdly reliable narrator Araragi, class president among class presidents Hanekawa, shady problem-solver Oshino, and a certain pale, blonde former vampire.