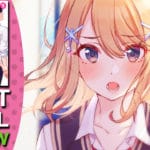 Review of the light novel There’s No Way a Side Character Like Me Could Be Popular, Right? by Sekaiichi .

Review is of the official English release from Tentai Books.

Check it out on Amazon: https://amzn.to/3fkJJBE

Get it from RightStuf: https://bit.ly/2Rn5juD

Get it from Bookwalker: https://bit.ly/35yQKw9

Synopsis: “I just love you sooooooo much, Senpai!”

My name is Tomoki Yuuki, a second-year student in high school. I’d say I’m a fairly normal student, save for the fact that everyone avoids me like the plague because I apparently look like I’m out for blood. Ike Haruma is the only one that doesn’t steer clear of me. He’s your typical ‘perfect guy’ in every sense; the protagonist with no real flaws that you see in any given story.

Life at school was going on as usual… until one day Haruma’s super popular little sister confesses to me out of the blue?! Though she later clarifies that her feelings toward me are anything but romantic and that she has an ulterior motive, I end up accepting my new role as ‘fake boyfriend’ as a favor to Haruma.

Believe it or not, the moment I start going out with her, Haruma’s idol-tier childhood friend and my super hot teacher get involved with me too!

Wait a minute, this can’t be a dream rom-com scenario setting itself up for me, can it?! I mean, there’s no way a side character like me could be popular, right? 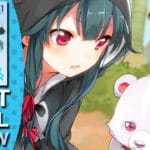 Review is of the official English release from Seven Seas.

Check it out on Amazon

Get it from Book Depository

Get it from RightStuf

Synopsis: A bouncy light novel series about a girl transported to her favorite video game world with her magical bearsuit equipped

Fifteen-year-old Yuna prefers staying home and obsessively playing her favorite VRMMO game to doing anything else, including going to school. When a strange new update gives her a one-of-a-kind bear outfit that comes with overpowered abilities, Yuna is torn: the outfit is unbearably cute, but too embarrassing to wear in-game. But then she suddenly finds herself transported into the world of the game, facing down monsters and magic for real, and the bear suit becomes the best weapon she has!

Didn’t I Say to Make My Abilities Average in the Next Life?! 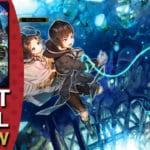 Review is of the official English release from . Check it out on Amazon: https://amzn.to/2Y46Hqz

Get it from iBooks: https://apple.co/2MFELSP

Get it from Kobo: https://bit.ly/3kGqKUT

Get it from Google: https://bit.ly/2Y0CwzD

Get it from Bookwalker: https://bit.ly/2MFXRbB

Synopsis: One evening in early spring, eight-year-old Erika Aurelia realizes she’s the detestable little villainess from an otome game called Liber Monstrorum: The Winter Maiden and the Phantasmic Beasts. As if that wasn’t bad enough already, Erika’s role in the game is to pester the main character… and then die in order to kick off a mysterious series of events! These incidents are different in each love interest’s route, and seven routes means seven deaths to avoid. Not one to throw in the towel, Erika knows she must take action to destroy her death flags—and since her life is on the line, there’s no time to lose! Her very first death flag is set to rise after she meets two noble children from a prominent magician’s house. In order to prevent the resulting incidents, the Gold Rush Murders, she arms herself with her brother’s expensive(!!!) magical items and heads into the ancient Seafarer’s Ruins. But things don’t quite go according to plan…

The Epic Tale of the Reincarnated Prince Herscherik

Reincarnated as a Sword 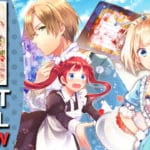 Review is of the official English release from J-Novel Club. Check it out on Amazon: https://amzn.to/360ao0U

Get it from Bookwalker: https://bit.ly/2XFKVby

Get if from Google: https://bit.ly/3irYOBY

Get it from Kobo: https://bit.ly/3iiHsaK

Get it from iBooks: https://apple.co/33JcDrC

Synopsis: Surrounded by the hate-filled gazes of her people, the selfish princess of the fallen Tearmoon Empire, Mia, takes one last look at the bleeding sun before the guillotine blade falls… Only to wake back up as a twelve-year-old! With time rewound and a second chance at life dropped into her lap, she sets out to right the countless wrongs that plague the ailing Empire. Corrupt governance? Check. Border troubles? Check. Natural calamities and economic strife? Check. My, seems like a lot of work. Hard work and Mia don’t mix, so she seeks out the aid of others, starting with her loyal maid, Anne, and the brilliant minister, Ludwig. Together, they strive day and night to restore the Empire. Little by little, their tireless efforts begin to change the course of history, pushing the whole of the continent toward a new future. And why did the selfish princess have a change of heart, you ask? Simple—she didn’t. She’s just terrified of the guillotine. They hurt like hell, and Mia hates pain more than work. 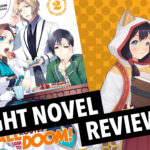 Review of the light novel My Next Life as a Villainess: All Routes Lead to Doom Volume 2 by Satoru Yamaguchi.

Review is of the official English release from J-Novel Club (J-Novel Heart). Check it out on Amazon: https://amzn.to/2yk6TaR 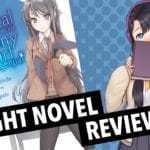 Review is of the official English release from Yen On.

Get it from RightStuf: https://bit.ly/2N9X3vC

Manga: Yes. Being released in English by Yen Press – https://amzn.to/2uQ4KS4

Synopsis: Bunny girls do not live in libraries. This is simply common sense. And yet, that’s exactly where Sakuta runs into one. Wanting to find out more about the mystery surrounding this bunny girl and maybe get a little closer to her in the process, Sakuta launches an investigation to figure out what’s causing her to be invisible to everyone around them. 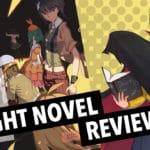 Review of the light novel Koyomimonogatari Part 2 (Volume 16 of the Monogatari Series) by Nisioisin.
Review is of the official English release from Vertical. Check it out on Amazon: https://amzn.to/2vk76IW