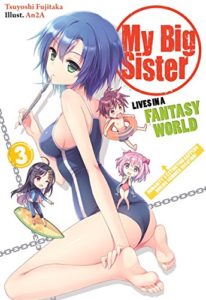 Yuichi, and the survival club are finally heading off for their summer training camp, to a luxurious villa in a remote seaside resort. Will anime-style swimsuit episode shenanigans ensue? If his big sister has anything to say about it, yes!

But while the gang enjoys some much needed fun in the sun, a darker plot lurks just offshore. The world’s strongest little brother is about to face his greatest challenge yet! 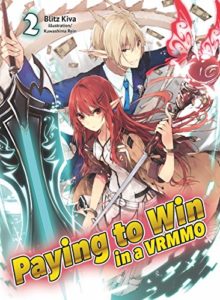 Paying to Win in a VRMMO: Volume 2

For Ichiro Tsuwabuki, gaming iconoclast and unparalleled whale, things have never been better. The VRMMO Narrow Fantasy Online is providing him with more entertainment and fulfillment than real life has for quite some time. Unfortunately, his unflinching dedication to being himself has left behind a long string of infuriated gamers.

Purchase Paying to Win in a VRMMO Volume 2 – http://amzn.to/2nqcl1e 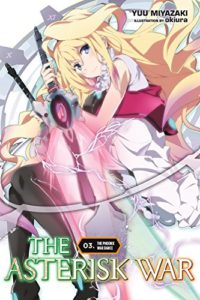 Ayato and Julis as well as Saya and Kirin blast through the preliminaries to reach the finals. In the midst of fighting and defeating formidable opponents like Arlequint Academy’s Ernesta and Camilla and others, Ayato is caught up in saving the young girl Priscilla from a street tough. But he soon finds out that her sister is none other than the famous Irene Urzaiz, their opponents in the next match! 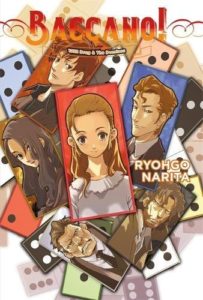 The year 1932. The alchemist Begg believed the drugs he created would guide people to the highest plane of existence. Drugs from which the junkie Roy can’t break free. Drugs which the Runorata Family executive lost to a thief. And where were those packets of white powder manufactured? The young girl Eve is about to discover her family’s true colors. Trouble stirs in the city that never sleeps as fate links them together like a chain of falling dominos… 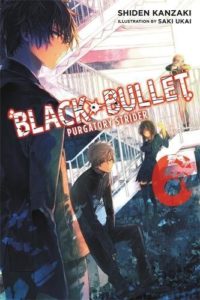 Rentaro is still a fugitive, running from the law for a murder he didn’t commit. He and Hotaru are bruised, bleeding, and barely on speaking terms, but they’re equally desperate to uncover the identity of Suibara’s killer. However, Police Superintendent Hitsuma hasn’t given up on pursuing Rentaro! With Hitsuma’s impending marriage to heartbroken Kisara advancing closer and closer, will Rentaro clear his name and rescue her in time? And what does saving Kisara mean for their future? 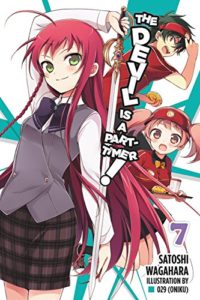 A door-to-door fraudster arrives in the neighborhood, swindling Urushihara! Already strapped for cash, Maou visits the office to contest the transaction, only to find himself tongue-tied at their vehement refusal! Unable to face the heat, is Maou truly out forty-five thousand yen?! Not if the Hero has anything to say about it… Other adventures await Maou and the crew in this volume of short stories–from becoming new cat owners, to a family shopping trip, to the story of how Chiho met Maou.

Purchase The Devil Is a Part-Timer Volume 7 – http://amzn.to/2mpy1Ja 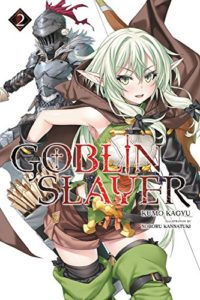 One day, a certain person arrives at the Guild to ask for Goblin Slayer by name. The request comes from the Water District, a neighborhood in the prosperous capital of the Supreme God, and the Arch Bishop that hails form there. The Arch Bishop was once a Gold-ranked adventurer known as the Sword Maiden who defeated the Demon King, a true hero. Now, she comes forward with the details of goblins somehow appearing within the Water district…

Goblin Slayer, alongside his companions High Elf Archer, Priestess, Lizard Priest, and Dwarf Shaman, enter the catacombs beneath the Water District to get down to the bottom of the goblin disturbance! 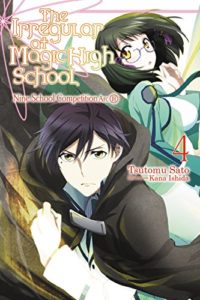 One of the centerpieces of the Nine School Competition, the Rookie Games. With only first years being allowed to take part in these matches, First High School’s top student, Shiba Miyuki steps on the stage to display a beautiful, elegant performance. Her brother, Tatsuya, also participates as an engineer that adjusts the athlete’s CADs and allows himself a moment to relax only when he admires his sister’s appearance in the games.

Though only supposed to be an irregular, a second-rate student, Tatsuya’s skills in adjusting the team’s CADs give them a strong advantage over the other schools. But as everything goes smoothly, an accident occurs that forces Tatsuya to take center stage where he’ll have to face the first year known as the Crimson Prince, a first year ace from Third High School, Masaki Ichijou! 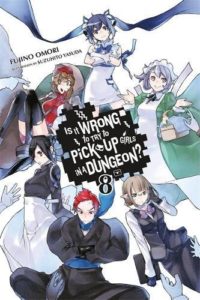 Is It Wrong to Try to Pick Up Girls in a Dungeon?, Vol. 8

The Rakia Kingdom dispatches soldiers. The God of War Ares leads the army of 30,000 on a sudden invasion. As the sounds of their thunderous march approaches the Labyrinth City Orario…not much changes. On the other side of the wall, the invaders raise their war cries but inside, the adventurers continue their peaceful daily lives. A prum marriage proposal, a city girl’s secret, romantic ballads serenading the deities–and a goddess weaving her own love song. These are the ordinary days of the gods and their children in Orario.

Purchase Is It Wrong to Try to Pick Up Girls in a Dungeon Volume 8 – http://amzn.to/2nCjXNv 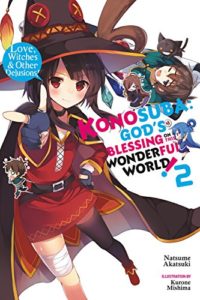 For the first time since being summoned to another world, Kazuma faces his very first winter. Genuinely living in a stable during winter is too miserable to bear. Securing a better quality of life is now the top priority. Soon, he’s visited by a chance he never even thought to ask for when he comes upon a request to exorcise some evil spirits haunting a mansion. While she’s normally a no-good goddess, Aqua actually seems to be an expert on exorcism so Kazuma replies immediately that he will take on this quest and rare opportunity but what’s actually in store for them at this creepy estate…?! 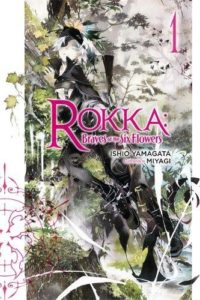 In order to stop the revival of the Demon God, six heroes are to be chosen to save the world. Those chosen surely have great combat abilities, special powers, or have been intensely trained as Saints. Excellence and ability are supposed to be the calling card of the chosen heroes, but this ragtag band lived far from normal, peaceful lives before they came together to become heroes.

Hanz’s mysterious assassin for hire trade. Mora and Chamo’s daily life at the World Temple. Nashetania and the youth scheming to win her heart, Goldof. The one who lives her life as a demon thinking of her family, Fremi. And the boy who lives with only his dream in mind, Adlet.

Their true feelings and personalities all seem to have another side to them… They will all come together to battle mystery, reveal the past, and step into legends in this new exciting series! 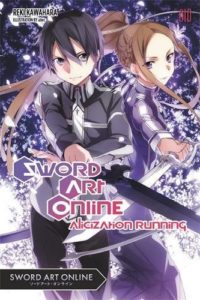 Kirito has wound up in another mysterious fantasy world again. In this VRMMO-ish place, the first person he meets is the young boy Eugeo. Kirito can hardly believe Eugeo’s an NPC when seeing his rich emotions and thoughts and ends up heading to the capital, Centria.

Two years later, Kirito and Eugeo have become First Order initiates of the North Centria Imperial Discipline Sword Academy and have been taken under the wing of their seniors, Soltirina and Golgoth. As they train and learn, they do nothing but strive to become one of the highest keepers of peace and order in the human realm, the Integrity Knights.

Aiming to reach the center of the Axiom Church that controls the capital, the two break past numerous obstacles to try and become one of the elite Greater Master Swordsmen, a title that only twelve people lay claim to in the whole academy! 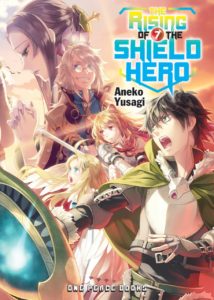 The Rising of the Shield Hero Volume 7

Naofumi and his friends defeat the Spirit Tortoise after it rampages across the country. They leave in search of the other missing heroes and meet Ost along the way, who says she is one of the Spirit Tortoise’s servants. She tells Naofumi that the Spirit Tortoise is still alive and that someone is pulling the strings to use the tortoise to destroy the world! Can Naofumi protect those he loves from this new danger?

Purchase The Rising of the Shield Hero Volume 7 – http://amzn.to/2n4w20Z 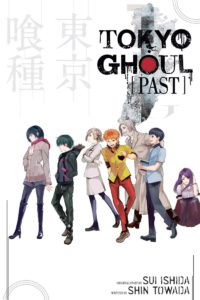 Explore the world of Tokyo Ghoul with these prose fiction spin-offs!

Ghouls live among us, the same as normal people in every way—except their craving for human flesh.

Ken Kaneki is an ordinary college student until a violent encounter turns him into the first half-human half-ghoul hybrid. Trapped between two worlds, he must survive Ghoul turf wars, learn more about Ghoul society and master his new powers.

Before the steel frame incident in the 20th Ward, there were reports of Ghouls lurking among the masses in Tokyo, carefully stalking their prey. This novel covers the events that occurred before the opening act of Tokyo Ghoul—a time when Kaneki was still human, the Kirishimas still lived together, and Rize enjoyed her feasts. 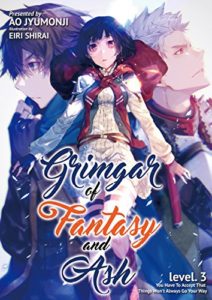 Grimgar of Fantasy and Ash: Volume 3

“Choco. Wait, could it be that Choco…?”
Haruhiro and his comrades have become famous due to achievements no one expected from them. With his comrades more confident, Haruhiro is still agonizing over what to do when more experienced volunteer soldiers come to him. Among them is a girl whose name is still in Haruhiro’s memories.

A class president among class presidents, a bespectacled model student who soars to the top of honors lists without fail, Tsubasa Hanekawa also happens to be a decent human being. True, she does have a habit of making single-minded assumptions, but they come from a good place and turn out to be fortuitous as often as not.

Loser extraordinaire Koyomi Araragi owes her his post of class vice president and a more significant debt of gratitude for her unstinting support during the darkest spring break of his life. All of it has blinded him to the possibility that his saintly classmate’s family situation might be no less adverse than that of his other lady friends.

Thus, at last, we face Hanekawa’s unlikely aberration in “Tsubasa Cat”—the concluding part of the legendary novel that captured the sensibilities of a new generation in the aught years and spawned an animated series that has won international popularity and acclaim—before the story continues with a Fake Tale… 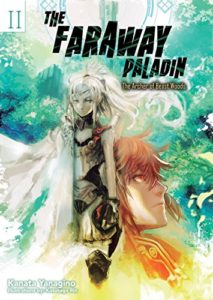 The Faraway Paladin: Volume 2: The Archer of Beast Woods

Will has come of age. As a sorcerer, warrior, and priest of Gracefeel, he departs the city and temple where he was raised on a journey to the north. It’s been two hundred years since the battle against the High King of the Eternals. Are there any humans left in this world and, if there are, will they accept Will with open arms, or see him as an enemy?