Here are the light novels being released during the month of January, 2018 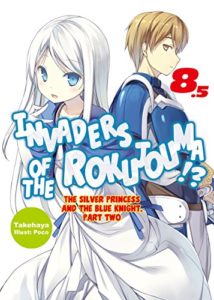 Invaders of the Rokujouma Volume 8.5
With the civil war now in full swing, Alaia and her allies mount a resistance to try and retake their beloved country. History seems to be unfolding all according to the legend, except for one major problem. The Blue Knight is still missing. In his stead, Koutarou and Clan find themselves in the center the chaos, trying to keep history from going too far off the rails so they can eventually get back home to their own place and time. Will they be able to save Forthorthe and themselves?
The 10th book in the Invaders of the Rokujouma!? series!
Purchase (Amazon.com) – http://amzn.to/2l58aaT 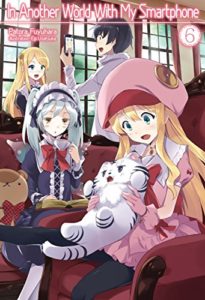 In Another World With My Smartphone Volume 6
16-year-old Mochizuki Touya continues everyday life in his new world, well aware that it could all come tumbling down at any moment. He’s the budding administrator of Babylon, the fledgling grand duke of Brunhild, and now he’s a… mecha pilot? Desperate to find a way to halt the incoming Phrase onslaught, Touya makes a mad dash for the Hangar of Babylon, hoping it can give him the edge he needs. What he finds is the Frame Gear, an ancient humanoid fighting machine! Join Touya and his ever-growing band of wives as they tap into their mechanical sides. All systems standby for a tale of swords, sorcery, and oversized wrenches.
Purchase (Amazon.com) – http://amzn.to/2AqGRiE 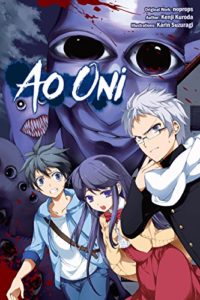 Ao Oni (Delayed from December)
Shun is the new kid in school, but he’s already managed to attract the attention of the school bully, who’s now making his life a living hell. It doesn’t seem like things could get any worse, until the night he finds himself and a group of his classmates inside a creepy, abandoned mansion known as the Jailhouse. They quickly start to hear strange sounds and see weird things, but everything escalates when they realize they can’t get out. Once they’re trapped inside, a blue, unnaturally large figure chases after them. Is it a new species? Or is it the ghost of their old classmate who died in an accident? Nobody knows, but one thing is for certain… If it catches them, they’re dead! The scariest game of tag in history begins!
Purchase (Amazon.com) – http://amzn.to/2zlNe4t 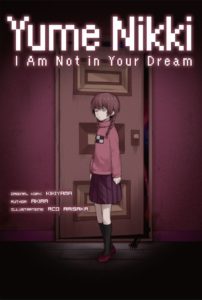 Yume Nikki: I Am Not In Your Dream (Delayed from December)
Based on the cult hit game, the novelization of Yume Nikki follows a lonesome girl into the bizarre dreamscapes that await her when she falls asleep. Opening doors and wandering aimlessly, is she really as alone as she thinks?
Purchase (Amazon.com) – http://amzn.to/2BGvmHv 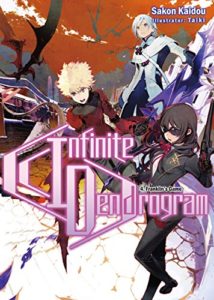 Infinite Dendrogram Volume 4
The city of duels is suddenly besieged by one of the Dryfe Imperium’s Superiors. Mr. Franklin, the Giga Professor. Both admirably cunning and incorrigibly heinous, the sadistic scientist sets his sights on throwing Gideon into utter Pandemonium. As luck would have it, Ray, Marie, and Rook are caught right in the middle of his malicious machinations. Though outmatched, outnumbered and outsmarted, the knights and Masters of The Kingdom of Altar don’t hesitate to retaliate. They have the spirit, no doubt, but will it be enough to defeat the mastermind of Franklin’s Game?
Purchase (Amazon.com) – http://amzn.to/2AEGYty 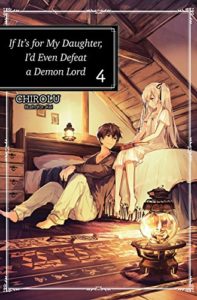 If It’s For My Daughter, I’d Even Defeat a Demon Lord Volume 4
“I’ve never thought of you as a replacement for my father.”

After Latina tells him about her real feelings on the night of the Ahmar festival, Dale is driven into a deep depression by his beloved daughter’s “rebellious phase.” It takes a talk with his “big bro” Kenneth for him to see what her words really mean… but how will he respond?

To make matters even more complicated, Latina receives a confession of love from Rudolph, her childhood friend. Love is hard, but this is getting out of hand!

Whatever happens, though, one thing is sure: the relationship between guardian and adoptive daughter is going to change in a big way, and there’s no turning back.
Purchase (Amazon.com) – http://amzn.to/2Bu4q9r 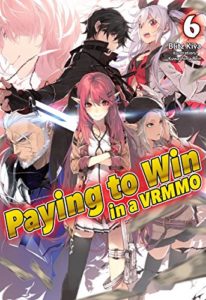 Paying to Win in a VRMMO Volume 6
The account hack has been resolved, but the fallout isn’t over. Pony Entertainment has begun to sink its hooks into Narrow Fantasy Online, threatening the Thistle Corporation’s independence. When Ichiro himself is arrested for unauthorized access of the company’s servers, he finds himself in a dilemma that even money can’t solve!
Purchase (Amazon.com) – http://amzn.to/2iFHwIE 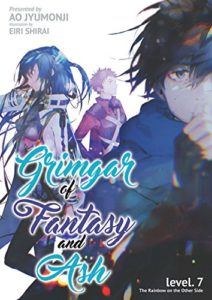 Grimgar of Fantasy and Ash Volume 7
Having escaped the Dusk Realm, Haruhiro and the party enter another world that is not Grimgar, one where the sun never rises. Even with no information to go on, Haruhiro still must lead his comrades. Fortunately, they discover a town where the residents of this new world live and they are able secure their safety for the time being. However, the environment is harsh and there are still a mountain of problems left to deal with. What’s more, they have no leads on the all-important method for returning to Grimgar.

They question whether they will they be able to go home, and if the real home that sometimes flashes through their minds is actually some other place entirely. With many feelings in their hearts, Haruhiro and the others proceed to explore the new world. As they wander through the ashes, what lies ahead for them?
Purchase (Amazon.com) – http://amzn.to/2AqaBfq 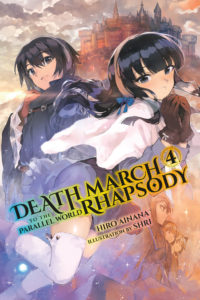 Death March to the Parallel World Rhapsody Volume 4
When Satou and his party cross into the famously unsafe Muno Barony, they find ramshackle villages, fortresses inhabited by the souls of the dead, and all manner of unrest. Amid the chaos, Satou meets a girl who happens to be the Baron’s daughter and stumbles across a conspiracy…
Purchase (Amazon.com) – http://amzn.to/2kgfHqH
Purchase (Book Depository) – http://bit.ly/2BEs2sY 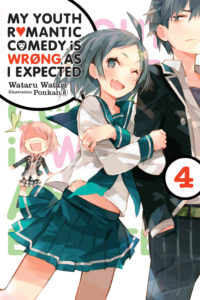 My Youth Romantic Comedy is Wrong As I Expected Volume 4
It’s summer break, and Hachiman is continuing his leisurely life of solitude-until Miss Hiratsuka forces the Service Club back together to volunteer at a campground. For some reason, Hayama, Miura, and their crew of normies are there, too… Thus begins a compulsory, youthful season of fireworks, tests of courage, nighttime conversations, and bathhouse incidents, with no escape for Hachiman. Summer is indeed a minefield for the loner…
Purchase (Amazon.com) – http://amzn.to/2iFjZrh
Purchase (Book Depository) – http://bit.ly/2BurAg5 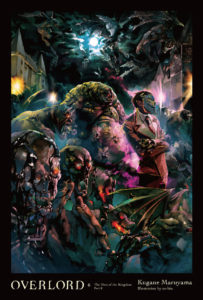 Overlord Volume 6
After weathering several setbacks and attacks, the Eight Fingers criminal organization is not about to simply sit back and watch quietly. To retaliate, they’ve dispatched the infamously brutal enforcers, the Six Arms. Rushing out to meet them in battle is the adamantite-rank adventurer party, the Blue Roses, led by Lakyus herself.
Purchase (Amazon.com) – http://amzn.to/2Aq86tw
Purchase (Book Depository) – http://bit.ly/2kihXhd 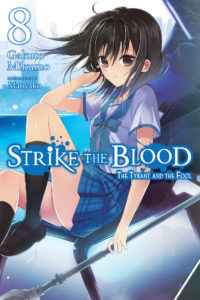 Strike the Blood Volume 8
When Kojou Akatsuki went to visit his sister in the hospital in middle school, he met a vampire named Avrora. Once he learned she was the key to saving Nagisa’s life, he helped Avrora escape. Now, the weapons dealer Zacharias is telling him to hand over Avrora in order to rouse the fourth primogenitor! As Zacharias’s plans plunge Itogami Island into peril, the fourth primogenitor finally awakens…
Purchase (Amazon.com) – http://amzn.to/2ADH44t
Purchase (Book Depository) – http://bit.ly/2kjd4nP 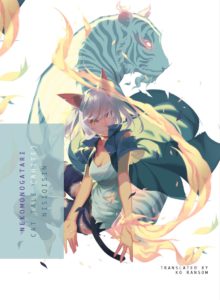 Nekomonogatari (White)
Officially the start of Monogatari’s second arc, Nekomonogatari (White) is written in Hanekawa’s perspective. It is the first story in the series that’s told from a different perspective than Araragi. After months since her last time turning into Black Hanekawa, Hanekawa finds a new oddity problem in the form of a white tiger that burns down buildings she had slept in the night before. The tiger is an oddity Hanekawa accidentally produced herself after years of domestic abuse that kept her from having her own room.
Purchase (Amazon.com) – http://amzn.to/2AlTgWV
Purchase (Book Depository) – http://bit.ly/2Am4lHB