Here are all the light novels releasing during the month of March, 2018. 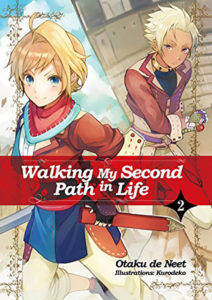 Walking My Second Path in Life Volume 2
Princess Fie escaped her life as an unwanted second bride, and is now living a happy, cross-dressing life as Heath, a squire for the Royal Knights.

Now, it’s time for Fie’s northern squire dorm and the eastern dorm to compete with each other in a duel championship. However, their opponents are all the top winners from the entrance exam! Fie and her friends have been training hard, but will their efforts be enough to beat the squires of the eastern dormitory?

Volume 2 continues the adventures of the plucky, princess-turned-squire Fie in her quest to become a Royal Knight!
Purchase (Amazon.com) – http://amzn.to/2FA9z3i 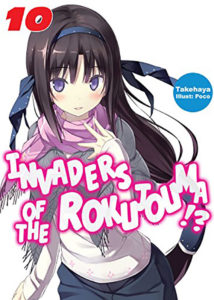 Invaders of the Rokujouma Volume 10
Koutarou and Clan are working their way back home from their interstellar adventure, but they have to make a pit stop about ten years off from their intended destination. As luck would have it, they encounter a young girl right after they land. Worried that she might have seen their spaceship in action, Koutarou decides to dig a little deeper. Things take an unexpected and heart-wrenching turn, however, when he realizes he has more in common with this girl than he initially thought.
Purchase (Amazon.com) – http://amzn.to/2CJnPU3 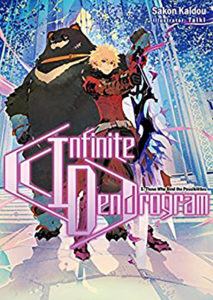 Infinite Dendrogram Volume 5
Thanks to Ray and his allies, the chaos in the city of duels is gradually abating. However, Giga Professor Franklin is far too obsessed with victory to let it end so easily… “Plan C!” he cries, as he plays yet another ace up his sleeve. But as Franklin stands proud, watching Gideon — and the kingdom with it — face utter destruction, a certain man moves out to show the Giga Professor the true meaning of the word.
Purchase (Amazon.com) – http://amzn.to/2oyzbFv 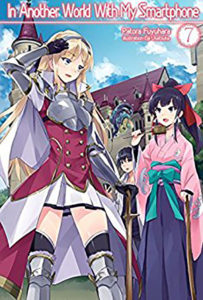 In Another World With My Smartphone Volume 7
16-year-old Mochizuki Touya has it all. Grand Duke of an upstart nation, inventor of goods ranging from hula hoop to caramelized popcorn, administrator of Babylon, and pilot of the Anti-Phrase Frame Gears. The western nations love him… but darker machinations unfurl in the far east. Yulong, the glorious Empire of Heaven, regards Touya with envious eyes, brazen enough to send assassins into Brunhild! To make matters worse, the mysterious young girl known as Sakura seems to have a connection with these dark assailants. In the background, dark forces gather. Something big approaches. Something far greater than anything Touya has ever faced before. Brace yourself… for a tale of swords, sorcery, and absolute calamity.
Purchase (Amazon.com) – http://amzn.to/2sYUnd1 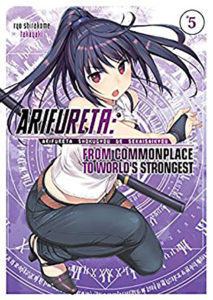 Arifureta From Commonplace to World’s Strongest Volume 5
With the addition of Kaori into their party, Hajime and his friends make for Myu’s hometown, the coastal city of Erisen. While crossing the Gruen Desert, they save a young Ankajian man, Bize, from a sandworm attack. Apparently, he was searching for a cure to the mysterious disease that has struck his people. His travels led him to conclude that a mineral known as stillrock held the key to saving his country, but it can only be found inside the Grand Gruen Volcano, a labyrinth far too dangerous for most. Hajime agrees to help Bize procure some, and the party begins their quest to conquer yet another labyrinth. But along the way, they meet a most unexpected foe…
Purchase (Amazon.com) – http://amzn.to/2HNsUhP 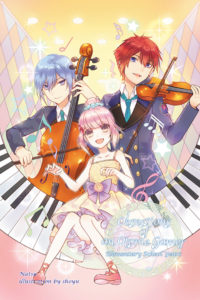 Obsessions of an Otome Gamer Volume 1
Rejected by her first crush, Mashiro finds herself hooked on an unbeatable music-themed otome game. Her high school days are spent learning the wonders of music, obsessively trying to claim the romance ending with the handsome 2D character who stole her broken heart. On the way home from her college entrance exams she gets distracted by a billboard for the game’s remake and unexpectedly falls down a manhole and plunges to her death!

Mashiro finds herself reincarnated in a world bearing similarities to the otome game she was obsessed with. Only this time, she has no idea how to avoid the twists and turns of certain character routes, including the bad endings! Now, as a seven-year-old, she decides to walk the path of a pianist to embrace the musical world to its fullest, but no matter where she turns, she just can’t seem to escape triggering events and getting involved with troublesome yet handsome characters!

Does Mashiro have any choice in where her new life will take her? Or is she en route to a horrifying ending manipulated by the original game world? Find out in this exciting shoujo light novel series that follows Mashiro’s life from elementary through high school. And just like an otome game, it will give readers the chance to choose which hero she ends up with and how their story unfolds in volumes focused on their route!
Purchase (Amazon.com) – http://amzn.to/2GPbJeO 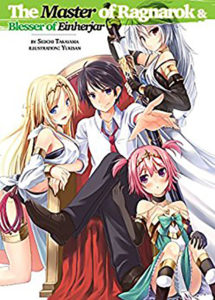 The Master of Ragnarok and Blesser of Einherjar Volume 1
Yuuto Suoh gets more than he bargained for when he joins his childhood friend Mitsuki Shimoya in testing out an urban legend. When he uses his phone to take a picture of himself with the local shrine’s divine mirror, he is whisked off into another world – one heavily steeped in the lore of the old Norse myths. Using his knowledge gained from school and from his solar-powered smartphone, he has the chance to bring the Wolf Clan, the same people who cared for him, to prominence, all while earning the adoration of a group of magic-wielding warrior maidens known as the Einherjar.
Purchase (Amazon.com) – http://amzn.to/2GKXuaC 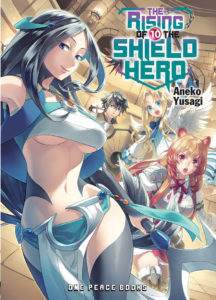 The Rising of the Shield Hero Volume 10
Finishing the battle with Kyo, Naofumi and his friends return safely to their world. The queen of Melromarc wishes to reward Naofumi for saving the world from the Spirit Tortoise.

“Then can I have my own land?”

After thinking about what he could do for his friend and partner, Raphtalia, Naofumi decides the best thing for their future would be the establishment of their own settlement–and he decides to build it on the ruins of Raphtalia’s old hometown! The start of a whole new chapter in our hero’s life begins here, in volume ten of this otherworld revenge fantasy!
Purchase (Amazon.com) – http://amzn.to/2sV06AN
Purchase (Book Depository) – http://bit.ly/2ESQSGD 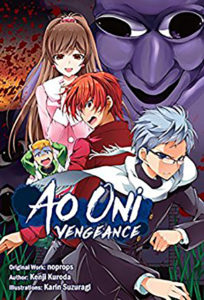 Ao Oni Vengeance
A week after the first nightmare, Shun begs his classmates not to go anywhere near the abandoned mansion on the outskirts of town ever again, but the gears of fate seem to be turning against his will. They find themselves in the Jailhouse once more, and the man-eating monster that lives inside is happy to welcome them. Will they have the power to change anything? The game is the same, and the rules are simple: get caught and you’re dead. It’s time for round two in this lethal game of tag!
Purchase (Amazon.com) – http://amzn.to/2CKLxiG 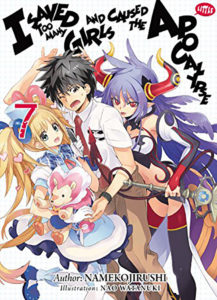 I Saved Too Many Girls and Caused the Apocalypse Volume 7
Rekka finds himself in another complicated situation when four new heroines need his help. Mio Kotozuka is a beloved pop star who’s had a very unusual encounter with a strange fan. Ellicia Otto, an orphan turned thief thanks to a peculiar power she has, is on the run from a powerful group of psychics after learning a dark secret. Zaia Gardendos Corona is an unlucky hero in need of some rescuing herself. And Lyun Sylpheed is a wind spirit who’s been driven from her home after a zombie-like epidemic sweeps the land. Rekka, meanwhile, is still just your average high school boy, but he’s going to have to figure out a way to save them all!
Purchase (Amazon.com) – http://amzn.to/2Co73yb 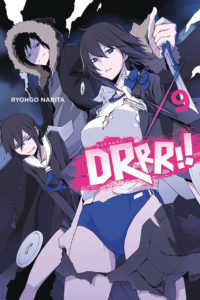 Durarara!! Volume 9
Izaya Orihara is used to getting his hands dirty, manipulating others for his so-called “love.” One day, it was bound to come back and bite him. Izaya gets kidnapped by a group called the Amphisbaena and finds himself in a dark place…
Purchase (Amazon.com) – http://amzn.to/2CJrjGd
Purchase (Book Depository) – http://bit.ly/2EXeJVH 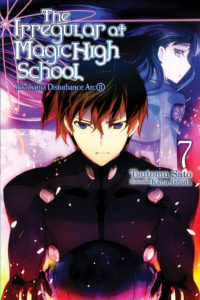 The Irregular at Magic High School Volume 7
It’s time for the National Thesis Competition to take place in Yokohama but what was supposed to be a grand event for the participating students has been turned into a battlefield. A mysterious band of armed magicians and mechanized weapons have stormed in and it may be up to Tatsuya and the others to get everyone home safely!
Purchase (Amazon.com) – http://amzn.to/2GMe4qA
Purchase (Book Depository) – http://bit.ly/2F6pDM9 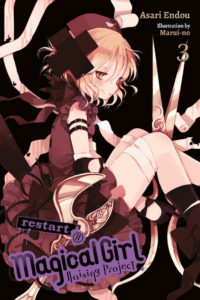 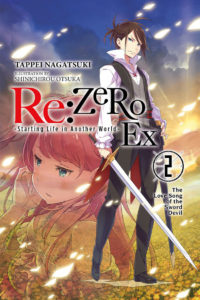 Re:Zero Starting Life in Another World EX Volume 2
The bestselling series from author Tappei Nagatsuki continues in this spin-off where some of your favorite characters capture the spotlight!

Long ago, in the kingdom of Lugunica, there was a great war between the royal military forces and the demihumans. A hero was born on that battlefield–the Sword Demon, Wilhelm Trias. This is the story of that legendary swordsman–and the woman he loved.
Purchase (Amazon.com) – http://amzn.to/2oshR5D
Purchase (Book Depository) – http://bit.ly/2sZgakT 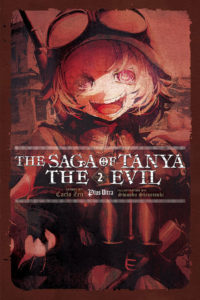 The Saga of Tanya the Evil Volume 2
“Girl–this, this is war.”

After being reborn and becoming a magic wielding soldier in the Imperial Army, Tanya Degurechaff bemoans her fate of being placed at the very edge of the front lines instead of a comfy place in the rear. Swearing revenge on Being X, she plunges head-first into battle, dragging her subordinate along with her!
Purchase (Amazon.com) – http://amzn.to/2t4P10f
Purchase (Book Depository) – http://bit.ly/2ETc2J1 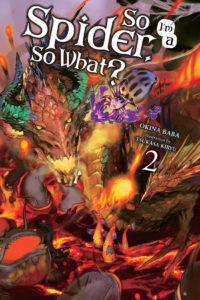 So I’m a Spider, So What? Volume 2
After many trials and challenges, our reborn spider has become very good at fighting (and eating!) monsters. Getting a little full of herself, she’s rushed headlong into some unexplored area and now, she’s facing her worst enemy…a huge dragon!
Purchase (Amazon.com) – http://amzn.to/2osCwqe
Purchase (Book Depository) – http://bit.ly/2oDbwUz 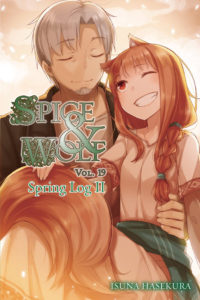 Spice and Wolf Volume 19
Blissful days continue for the ex-merchant and the wolf as they pass the days together in their mountain home. Ever since Col and Myuri set off on a journey of their own, the bathhouse has been a little shorthanded so a new hire was brought on. But this newcomer is a wolf, just like Holo and the problems with her joining the staff seem endless…
Purchase (Amazon.com) – http://amzn.to/2CKVdtM
Purchase (Book Depository) – http://bit.ly/2F90Jvp 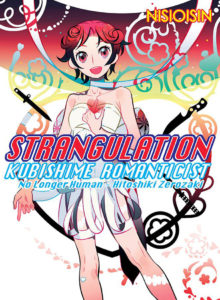 Strangulation Kubishime Romanticist (Zaregoto Series)
The debut work from NISIOISIN, Zaregoto is NISIOISIN’s twist on the I-novel where his narrator reveals a mystery and tries desperately to not take part in what transpires over the work. Full of intriguing young characters and action filled drama, Strangulation and Decapitation are the basis for the modern light novel movement creating a new genre of literature for Japan’s X generation and beyond.

College is a whole new adventure, rife with challenges, opportunities, and cold-blooded killers.

Fresh from unmasking an assassin on a posh island paradise, Ii-chan is finally an ultra-cool college student–jaded, sarcastic, and not exactly consumed by academic ambition. Now more interested in angst and anomie than in catching killers, Ii-chan figures that danger is a thing of the past. Wrong! There’s a homicidal maniac loose in Kyoto, a perp with the soul of an artist whose talent is apparent in the inspired way he festoons his crime scenes with body parts.
Purchase (Amazon.com) – http://amzn.to/2EXUg39
Purchase (Book Depository) – http://bit.ly/2DzcLOK 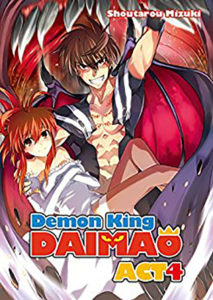 Demon King Daimaou Volume 4
Akuto Sai’s life is about to get even more complicated. Junko Hattori invites him to visit her family home, without telling him that the occasion is an arranged marriage meeting — for an arranged marriage between Junko and Akuto! Meanwhile, an assassin comes to Constant Magical Academy, targeting the air-headed Keena, of all people. Who is behind this assassination order? And most importantly… how will Akuto react when he learns of this plot? Prepare to see a darker, angrier Akuto in Volume 4 of Demon King Daimaou!
Purchase (Amazon.com) – http://amzn.to/2BPKIIC