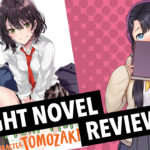 Review of the light novel Bottom-Tier Character Tomozaki by (Author).
Review is of the official English release from Yen On

SYNOPSIS:
Tomozaki is one of the best gamers in Japan, and in his opinion, the game of real life is one of the worst. No clear-cut rules for success, horribly balanced, and nothing makes sense. But then he meets a gamer who’s just as good as him, and she offers to teach him a few exploits…