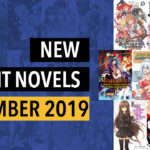 In this video I cover the new and notable light novels being officially released in English during the month of November, 2019.

Unfortunately, there are 2 titles not covered in this video, as they were announced after the video went live.

Both titles are from Sol Press.

First up, a title Sol Press already announced as part of its Panty Press line, Busy Wizard: This Warlock Just Wants to Provide for his Wives! Vol. 1. This title will go live November 21.

“If you can use magic, then you will become popular!” Chris who has been deceived by those words, continued to practice dark magic in the mountains. He ended his days of training and helped a beautiful slave girl that was attacked in the middle of his journey to the city. That girl Olivia has a curse which is “cursed with bad feeling when pointed at favor”, and was banished from her household because of it. Chris, who had fallen for Olivia at first sight, ask her to marry him. He experienced his first night with Olivia who accepted the offer, and in addition to “rising up”, he had the purpose of “making my bride happy”. Chris who visited the temple to unravel the curse of Olivia, is suddenly recognized as a “Hero” by the oracle of the Goddess of Law. Because of that, Chris’s life changed completely, and suddenly gets a mansion. One day, he was asked by Diane-san, a millionaire who was good friends with Olivia ..?

Also just announced is a new license. And it’s a title that’s been long-wanted by the light novel fanbase.

Chivalry of a Failed Knight!

They will be releasing volumes 1-3 on November 16.

Modern mages, known as Mage-Knights, materialize their souls as armaments. Attending a school for Mage-Knights is Ikki Kurogane, a failed knight—the Worst One.
One day, he is challenged by Stella, a Rank A knight, to a duel, putting lifelong servitude on the line. What Ikki lacks in magical power, however, he makes up for with his unorthodox mastery of the sword, leading him to victory!
“I’ll do it! Make me do whatever you want! Stupid creep!” Though she regrets her defeat, Stella begins to fall for Ikki.
Meanwhile, in the battle for the top of the knight world, the Worst One begins to grab the attention of every Mage-Knight out there, becoming known as Another One!
The curtain rises on Ikki’s school-based, sword-action underdog tale as he cuts through one powerful foe after another!

Even more to look forward to in November!