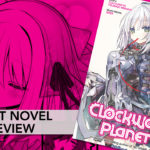 From the author of No Game No Life!

–I know this is sudden, but the world had already collapsed long ago. Earth had died, but the entire planet was reconstructed and reproduced using clockwork – “The Clockwork Planet.”
One day, a black box suddenly crashed into the house of Naoto Miura, a high school failure, from above. Inside was– an automata girl.
“For me to be forced to sleep for as long as two hundred years from just one little fault, has the intelligence of humanity still yet to exceed even that of a flea?”

A gearhead fantasy meshed together by Yuu Kamiya and Tsubaki Himana!