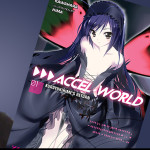 Even in the future, all the advances and innovation in the world can’t change the dynamics of the school playground. And for Haruyuki Arita, a fat kid in junior high, that means he’s destined to always be at the bottom of the food chain, prime pickings for the school bullies. But when he is approached by Kuroyukihime, a beautiful and aloof upperclassman, Haruyuki’s life is turned on its head as he dives into Brain Burst, a mysterious computer program, and the Accelerated World with her help. It’s in the Accel World that Haruyuki casts off his depressing reality and takes hold of the chance to become a Burst Linker, a knight to protect his princess! 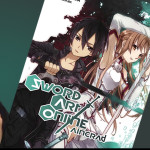 Book review for Sword Art Online Volume 1: Aincrad. This is the official English translation of the Japanese Light novel by Reki Kawahara.

In the year 2022, gamers rejoice as Sword Art Online – a VRMMORPG (Virtual Reality Massively Multiplayer Online Role Playing Game) like no other – debuts, allowing players to take full advantage of the ultimate in gaming technology: NerveGear, a system that allows users to completely immerse themselves in a wholly realistic gaming experience. But when the game goes live, the elation of the players quickly turns to horror as they discover that, for all its amazing features, SAO is missing one of the most basic functions of any MMORPG – a log-out button. Now trapped in the virtual world of Aincrad, their bodies held captive by NerveGear in the real world, users are issued a chilling ultimatum: conquer all one hundred floors of Aincrad to regain your freedom. But in the warped world of SAO, “game over” means certain death – both virtual and real… 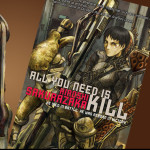 My book review of the Japanese light novel All You Need Is Kill by Hiroshi Sakurazaka.

This light novel was the basis for the Tom Cruise film, Edge of Tomorrow.

When the alien Mimics invade, Keiji Kiriya is just one of many recruits shoved into a suit of battle armor called a Jacket and sent out to kill. Keiji dies on the battlefield, only to be reborn each morning to fight and die again and again. On his 158th iteration, he gets a message from a mysterious ally–the female soldier known as the Full Metal Bitch. Is she the key to Keiji’s escape or his final death? 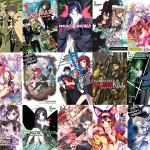 If you ever decide to peruse my blog archives, you’ll notice a recurring fandom of anime.

Some people don’t realize many of the current anime are adapted from novels.

These works, Light Novels, are usually in the realm of 50,000 words (about 200-215 pages) and aimed at a 15-25 year old audience. Another aspect of Light Novels is they are almost always a series (sometimes having ten or more volumes).

For a long time, the only way for English speaking audiences to enjoy Light Novels was to read fan driven translation projects. While some of these were decent, there were far more which suffered from horrid grammar and editing. A few I tried were unreadable.

But thanks to a growing fanbase for anime and manga, a few English publishers are getting on board and bringing some more popular Light Novels to market.

My current hero publisher is Yen On, a sub-press of Yen Press, who have been releasing manga for a number of years. A few other publishers are releasing the odd title, but Yen On puts out four or more Light Novels per month. Some examples are Sword Art Online, Is It Wrong To Try To Pick Up Girls In A Dungeon, The Devil is a Part-Timer, Durarara!! and many more.

I love to read, but find myself increasingly pressed for time to do so. With Light Novels being relatively short and a not-too-taxing read, I’m able to breeze through a volume or two per week.

I’ve had a YouTube channel for a number of years, but have never found a real niche for it. The past two months I’ve been posting my reviews of Light Novels each week and it’s helped provide me with some focus.

I originally kept my Light Novel reviews separate from this site, but I’ve now decided to start posting them here. At least it will give a little life to the place 🙂

So what do you think? Are you reading any Light Novels? Or would you rather watch the anime? Let me know in the comments.