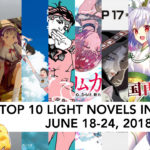 Click here to view on YouTube
Here are the Top 10 Light Novels in Japan for the week of June 18-24, 2018.
Quite a shuffle on the list this week, with seven new titles in the Top 10!

9) 06,696 Copies Sold Houshin Engi : Shirube naki michi e
aka Hoshi Engi To the Path With No Guide
Novel adaptation of the Hoshin Engi Novels. The original manga, which ran 1996-2000 was released in English by Viz. A 26 episode anime based on the series aired in 1999 and was released in English under the name Soul Hunter. A new anime just aired starting in January and streamed on Crunchyroll

6) 07,781 Copies Sold Sword Art Online Alternative Gungale Online 7
https://www.novelupdates.com/series/sword-art-online-alternative-gun-gale-online/
Series currently has an airing anime. It has been licensed for English release by Yen On. The first volume will release June 26. The series is written by Keiichi Sigsawa who is the author of Kino’s Journey.

5) 08,258 Copies Sold Mirai no Mirai
aka Mirai of the Future
https://myanimelist.net/anime/36936/Mirai_no_Mirai
Novelization of the upcoming anime film – releasing July 20, 2018
Same director as The Girl Who Leapt Through Time, Summer Wars, Wolf Children, and The Boy and the Beast.

4) 09,786 Copies Sold Isekai wa smartphone to tomo ni. 13
aka In Another World With My Smartphone
https://www.novelupdates.com/series/in-a-different-world-with-a-smartphone/
Licensed for English release by J-Novel Club.
12 episode anime streamed on Crunchyroll. It covered volumes 1-3 of the light novel series.

3) 12,486 Copies Sold Shin – Tenchi Muyou Ryououki (or Ryoh-ohki) gaiden (side story) Tenchi Muyou! GXP 17
https://www.novelupdates.com/series/tenchi-muyo-gxp/
There have been various anime, manga, and light novels. Most of the anime were licensed and released in English. Seven Seas has just started releasing the True Tenchi Muyo light novels. GXP is not licensed at this time.

2) 15,329 Copies Sold Kishibe Rohan wa sakebanai ( collection of short stories)
-Kishibe Rohan wa sakebanai is from the jojo no kimyou na bouken ‘s manga.
aka Rohan Kishibe Does Not Shout: Short Story Collection 4th volume
The manga has 121 volumes in Japan. It is licensed for English release by Viz. Recent episodes of the anime adaptation can be viewed on Crunchyroll 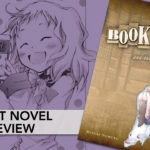 For Tohko Amano, a third-year high school student and self-styled “book girl,” being the head of the literary club is more than just an extracurricular activity. It’s her bread and butter…literally! Tohko is actually a literature-gobbling demon, who can be found at all hours of the day munching on torn out pages from all kinds of books. But for Tohko, the real delicacies are hand-written stories. To satisfy her gourmet tastes, she’s employed (rather, browbeaten) one Konoha Inoue, who scribbles away each day after school to satisfy Tohko’s appetite. But when another student comes knocking on the literary club door for advice on writing love letters, will Tohko discover a new kind of delicacy? 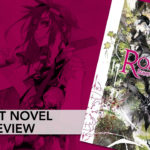 Review of the light novel Rokka Braves of the Six Flowers Volume 1 by Ishio Yamagata.
A fantasy adventure series with this volume involving a locked room mystery twist!

Cho and I had a spoiler-filled conversation about Rokka at her website – https://englishlightnovels.com/2017/06/04/the-strongest-ln-editorial-in-the-world/

Seven heroes gather to save the world–but the legends spoke of only six.

Long ago, the Evil God was sealed at the edge of the continent, where it lies in slumber. Each time it awakens, it threatens to plunge the world into hell, and each time, six powerful warriors are chosen to seal it away again. But now, as the cycle begins anew, the Crest of the Six Flowers marks not six Braves…but seven. Hans, the mysterious assassin for hire. Mora, the elder of the All Heavens Temple. Chamo, the young but deadly Saint of Swamps. Nashetania, the princess, and Goldof, the knight yearning to win her heart. Fremy, the girl with a dark past. And Adlet, the boy with a dream. When the Braves of the Six Flowers realize one of their number is an impostor, hero will turn on hero in this exciting new series!