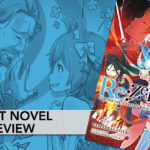 Review of the light novel Re:Zero EX Volume 1 The Dream of the Lion King by Tappei Nagatsuki
Spin-Off from the Re:Zero light novel series. These side novels feature secondary characters filling in backstory. For this volume, it focuses on Crusch Karsten & her vassal Ferris

Their dream for the future was born long ago…

During the royal selection, Duchess Crusch Karsten declared her plans for the Dragonfriend Kingdom of Lugunica: to destroy the covenant with the Dragon and rebuild the nation stronger than before. But where did her radical vision come from? Why does she want to change her country so badly? The answer lies in her past…

This collection of short stories chronicles Crusch’s growth into a nobelduchess vying for the crown, her vassal Ferris’s struggles with knighthood and family, and their love for the warm-hearted you prince who inspired them both.