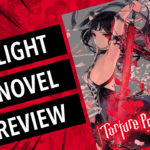 Review of the light novel Torture Princess: Fremd Torturchen Volume 1 by Keishi Ayasato
Review is of the official English release from Yen On

SYNOPSIS:
I AM THE TORTURE PRINCESS, ELISABETH LE FANU.
I AM THE PROUD WOLF AND THE LOWLY SOW.
A beautiful woman appears before Kaito Sena following his tragic death and rebirth into another world. Introducing herself as the Torture Princess, she orders him to become her loyal servant. Naturally, his response is…”Hard pass.” And so Elisabeth presents him with two choices-become her butler or be tortured to death. After rethinking his hasty decision, Kaito is forced to wait on Elisabeth hand and foot, as well as aid her in her mission as the Torture Princess, which is the subjugation of the fourteen ranked demons and their contractors. But there’s a catch. Once her mission is complete, Elisabeth is fated to die alone-forsaken by heaven, earth, and all of creation.