These are the light novels releasing in the month of May, 2017. 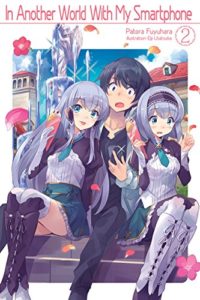 In Another World with my Smartphone Volume 2

Undeterred by his untimely death on Earth, 15-year-old Mochizuki Touya continues to meander around in another world! After a series of misadventures, the young man has assembled a motley crew of adventurers including the timid mage Linze, the feisty brawler Elze, the ever-hungry samurai Yae, and even the young archer Yumina, heir to the Belfast throne. Together with his party (and a divine white tiger), Touya sets his sights on the horizon, heading for the demi-human kingdom of Mismede! But all is not what it seems… the beastman king issues a personal challenge, and a black-scaled dragon could soon spell out Touya’s doom! The curtains lift once again on an epic tale of sorcery, smartphone apps, and… gunblades?! 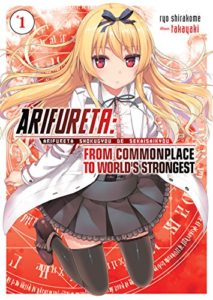 Seventeen year old Hajime Nagumo is your average, everyday otaku. However, his simple life of pulling all-nighters and sleeping in school is suddenly turned upside down when he, along with the rest of his class, is summoned to a fantasy world! They’re treated like heroes and tasked with the duty of saving the human race from utter extinction. But what should have been any otaku’s wet dream quickly turns into Hajime’s nightmare. While the rest of his class are blessed with godlike powers, Hajime’s job, Synergist, only has a single transmutation skill. Ridiculed and bullied by his classmates for being weak, he soon finds himself in despair. Will he be able to survive in this dangerous world of monsters and demons with only a glorified blacksmith’s level of strength? 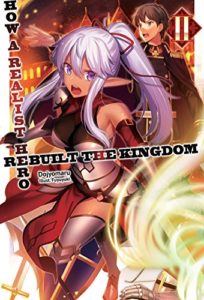 How a Realist Hero Rebuilt the Kingdom: Volume 2

When Souma Kazuya was summoned to another world to become a hero, he didn’t go on an adventure, he became the king of Elfrieden and took to governing instead. Using knowledge from his old world, Souma began to push forward reforms every day, but eventually there came a time when he would have to face the general of the army, Georg Carmine, who refused to soften his rebellious stance. When the plans of the neighboring Principality of Amidonia get involved, things move from the political arena to the military one.

Will Souma be able to safely bring this war to a conclusion?!

This amazing transferred-to-another-world internal-politics fantasy series is on its second volume! 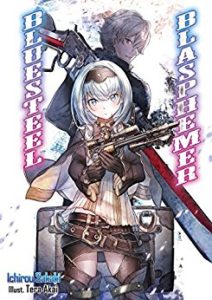 Yukinari Amano loves guns. After reincarnating into another world, the young man goes on a journey with Dasa, the younger sister of the girl who gave him a second life. However, while on the road, the pair are attacked by a local deity—an “erdgod.” No normal person could possibly defeat one—so when Yukinari uses his knowledge of guns and newfound abilities to do the impossible, he becomes worshipped as the area’s new god himself!

Get ready for an alternate-reality, gun-and-sword-filled, action-packed adventure! 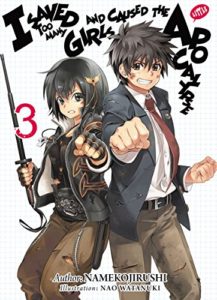 I Saved Too Many Girls and Started the Apocalypse Volume 3

Rekka has just finished another adventure and saved a new series of heroines. But when he gets back home, he finds a new girl who demands that he run away and marry her! When a disaster involving Harissa makes him realize how dangerous it is to be around him, he runs away with the new girl, Hibiki Banjo, leaving the other heroines behind. But how can Rekka fight when he’s cut off from all the girls he’s worked so hard to save? 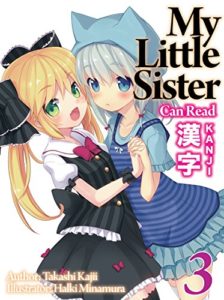 The 23rd century is back to normal: The prime minister is a 2D character again and kanji has been banished to the history books… Except for the appearance of the Special Cultural District that keeps up the old writing style and traditions, that is. But that shouldn’t affect Gin Imose’s life, after all. Until one day, he receives an email from someone who shouldn’t even exist… his long-lost blood-related little sister! 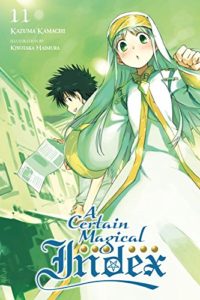 Now that the Daihasei Festival has ended, life returns to normal for the boy who knows nothing but misfortune, Touma Kamjiou. But in a stroke of unbelievably good luck, Kamijou manages to snag two tickets for a getaway overseas trip! He and the sister, Index, make their way to pearl of the Adriatic, Venezia, where maybe the two will even have romantic rendezvous and many heart throbbing events. But is everything really going Kamijou’s way, or is there something more to this too-good-to-be-true adventure… 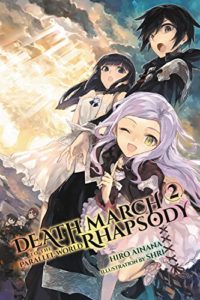 Satou has broken free of the demon’s labyrinth, rescuing Pochi, Tama, and Liza. And after liberating two more girls from slavery, he’s on his way to building an entire harem! But beautiful girls aren’t the only ones coming his way… 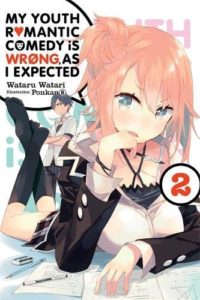 My Youth Romantic Comedy Is Wrong, As I Expected, Vol. 2

As usual, Hachiman Hikigaya’s warped personality prevents him from having any enjoyable moments of youth. The days all the seem the same until suddenly, an ‘incident’ occurs in class. This is a problem that no one who had any semblance of a normal high school life could solve, but if it’s Hachiman, just maybe… 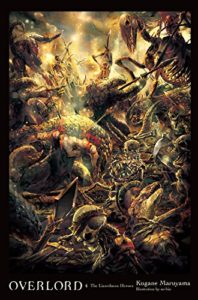 An army of death approaches a peaceful lizardman village–an army of undead deployed by Nazarick. Its commander is the Sovereign of the Frozen River Cocytus. The lizardman coalition shall face the Great Tomb of Nazarick. The weak are meat the strong shall eat in the merciless world that awaits in Volume 4. 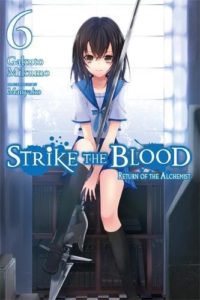 When all the students depart for a school field trip to the mainland, Koujou is delighted to hear that he’ll finally get a chance to be free of observation for at least a little while, while Yukina has mixed feelings about the whole situation. But events move quickly when an alchemist by the name Kou Amatsuka appears, with the goal of reviving the holy grail of alchemy–the liquid metal lifeform known as “Wiseman’s Blood.” As the crisis deepens, even Asagi becomes involved as this relic of alchemy grows more and more uncontrollable. What can the world’s strongest vampire do?! 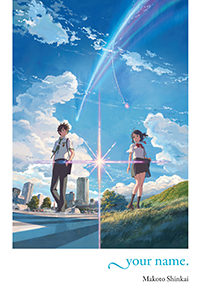 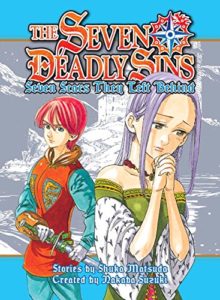 The Seven Deadly Sins (Novel): The Seven Scars Left Behind

The Seven Deadly Sins—a legendary order that once served the Kingdom of Liones as the mightiest of its Holy Knights—stand accused of treason and have fled the realm. Princess Margaret and young Gilthunder, the slain commander Zaratras’ son, know the terrible truth about the betrayal but dare not speak of it, not even to each other.

The aftermath of the event that shook Britannia comes to life in seven prose chapters that provide a superb introduction to the rich world of the original comic and satisfy longtime fans’ craving for more. Illustrated in a classic, warm style by the creator himself, Seven Scars They Left Behind walks the royal road of fantasy. 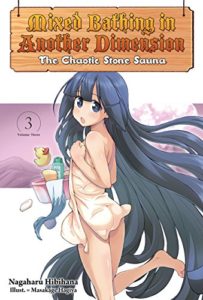 Mixed Bathing in Another Dimension Volume 3

Touhou Houjou continues his journey in a fantasy world while somehow finding more uses for his power to freely summon a piping hot bath. After their ordeal in Hadesopolis, they meet a young girl named Rakti, who reveals herself as the Goddess of Darkness. Together they travel to the country of fire and blacksmiths, Hephaestusopolis. Touya sets off to collect more blessings from the goddesses and strengthen his power… but not without stopping to take a bath with some cute girls along the way! 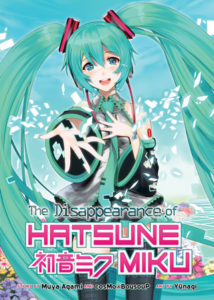 The Disappearance of Hatsune Miku

An all-new, official Hatsune Miku light novel!
The Disappearance of Hatsune Miku is a new light novel based on Hatsune Miku―the singing, dancing, and gaming sensation that’s taken the world by storm! This self-contained, original novel was inspired by the Hatsune Miku song series of the same name, a collection of tracks so popular that they forced down the servers that hosted them, earning the name “The Disappearance of Hatsune Miku.” Soon after, Hatsune Miku grew into a huge multimedia phenomenon, with millions of fans worldwide.
Asano is a young university student tasked with testing out the technology department’s newest creation―the life-like android, Hatsune Miku. Although Hatsune Miku has a lot to learn, Asano comes to see her as more than merely a piece of tech and together the two learn what life and love is all about.
Purchase – http://amzn.to/2p0Wl9g

See you all next month with the titles coming in June!