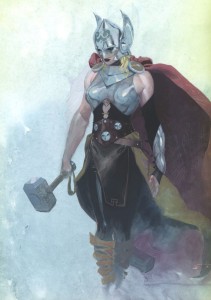 Not too long ago, Chris Evans, current Captain America in the Marvel Film Universe, revealed his intention to leave the role after his six film contract was done. That’s not all. Robert Downey Jr. is done with Marvel after Avengers 2 & 3. Chris Hemsworth has the same number left as Chris Evans.

Now, Marvel has said they aren’t really into reboots. In fact, Kevin Feige, who heads Marvel Studios, says he has a rough timeline going to 2028 for the Marvel movies. So either we won’t see these roles again, or they have to be recast.

But what if the comic books, those wonderful beacons of light which guided these movies to success in the first place, showed the way? What if they found a fan friendly way to have someone else take on these roles. There would be no need to have fans be disoriented by a “new” Tony Stark, they would just be shown someone new in the armor. Thor wouldn’t be a new person, we’d see the hammer being handed over. In essence, the comics could forge a new path for these characters with new people occupying the role long before the movies catch up and require new casting.

So we now have two of the three roles recast in the comics. Steve Rogers will soon be replaced as Captain America. And now the news this week that Thor will also be replaced. If, in the next year, these changes stand and we have a new Iron Man, I’d say this is a done deal. After all, we probably have at least three to four years before Avengers 3. If that’s the case, Marvel comics have four years to get comic fans happy with the new versions of these characters. Then it’s just up to Marvel movies to make it happen.

Maybe like a massive throw down with Thanos wielding the Infinity Gauntlet would cause some of our heroes to bow out of their current roles and hand the power to someone else? Is it just a coincidence that the three big players all have their contracts ending with Avengers 3?

I haven’t seen anyone say this. Maybe because they’re all too busy freaking out about Thor being a woman. I say, meh. The character design actually looks pretty cool, and it could provide material for some amazing new arcs, especially if the new Thor isn’t Asgardian.

So what do you think? Is this just more comic reshuffling to build hype, or part of a larger plan to aid the movie universe down the road?