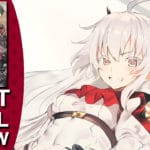 Review of the light novel May These Leaden Battlegrounds Leave No Trace Volume 1 by Kei Uekawa — “上川 景.

*Note* was originally advertised as The Penetrated Battlefield Should Disappear

Review is of the official English release from Yen On.

Check it out on Amazon: https://amzn.to/38c2NxA

Get it from RightStuf: https://bit.ly/3ikOIne

Synopsis: For a hundred years, East and West have waged a ferocious war with everything from tanks to witchcraft. On this savage battlefield, one young soldier from the East learns of the daemon’s bullet-and that anyone struck by it will disappear from the world as if they had never existed…