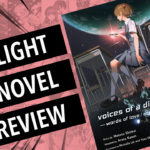 Review of the light novel Voices of a Distant Star: Words of Love/Across the Stars
Review is of the official English release from Vertical Inc.

SYNOPSIS:
Award-winning director and author Makoto Shinkai offers a romantic sci-fi tale about young love and space adventure, based on his animated film. This new novel gives readers more insight into Mikako and Noboru’s relationship.
Fans of the original series will again be immersed in the beautiful world of Shinkai.

I vaguely thought it meant anywhere there was cell phone reception.

It’s the year 2046. Mikako Nagamine and Noboru Terao are middle school classmates, tentatively sharing an unspoken first love—but unbeknownst to him, Mikako has been recruited into the UN Space Force, and instead of going on to high school, will join the spacecraft Lysithea to search for alien Tarsians. As she travels further and further to the outer reaches of the solar system, the time it takes for a text message to reach the Earth grows longer and longer. Back on Earth, time passes normally for Noboru, but as the years pass he still can’t forget the voice on the other side of the cell phone…

Steeped in nostalgia and memory, Arata Kanoh brings to the page the award-winning OVA by acclaimed filmmaker Makoto Shinkai, director of She and Her Cat, The Place Promised in Our Early Days, Garden of Words, 5 Centimeters per Second, and the highest-grossing anime film of all time, Your Name.
Arata Kanoh is a writer who has produced novelizations of Makoto Shinkai’s other works, including 5 Centimeters Per Second (also available from Vertical). 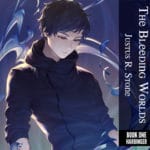 My, it’s been a long time since I wrote a blog post exclusive to this site. In general, I’ve just been posting my YouTube work. But this is a big thing, so it needs to be here!

It’s taken a while of planning and then working with an artist, but The Bleeding Worlds books are getting brand new, all exclusive, covers!

Back when I first released the series, I used stock imagery for the main male figure. It was always my hope to have original covers, but it took some time and money to realize that desire. So without further ado, let me introduce you to the new covers…

The artist is Starbottle. You can check out more of her work on her Pixiv page.

These covers will go live later this month. I’m just waiting for final approval for the 4th book files and for the old versions to be listed as out of print. EBooks will be updated and should automatically have the new covers if you update your downloaded files.

Thanks to everyone for their ongoing support for the series. I’m so pleased with these covers and I hope they help a whole new group find this series.

I am working on something new, but it’s slow days right now. Hopefully will have something more to talk about in coming months. Until then, all the best! 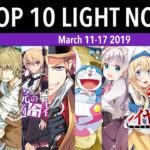 Here are the Top 10 Light Novels in Japan for the week of March 11-17, 2019
List is compiled from the Oricon website.


10. 6,180 Copies Sold – Vol. 4
aka 新説 狼と香辛料 狼と羊皮紙 Ⅳ
aka Wolf and Parchment
Sequel series to Spice & Wolf. Both the prequel and sequel series are licensed by Yen On.

8. 7,538 Copies Sold – Watashi, Nouryoku wa Heikinchi de tte Itta yo ne! Vol. 10
私、能力は平均値でって言ったよね! 10
aka Didn’t I Say to Make My Abilities Average in the Next Life?

I Said Make My Abilities Average!

7. 7,664 Copies Sold
本好きの下剋上～司書になるためには手段を選んでいられません～第四部「貴族院の自称図書委員Ⅵ」
aka Ascendance of a Bookworm
Licensed for English release by J-Novel Club

Light Novel series is licensed for English release by Yen On

No English license for the spin-off series. The main series is licensed by Yen On 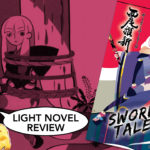 Review of the light novel Katanagatari (Sword Tale) Volume 1 by Nisioisin
The review is of the official English Omnibus version released by Vertical Inc.
A tale of 12 Katanas and the pair crazy enough to seek them! 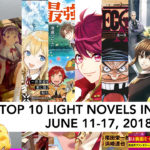 Here are the Top 10 Light Novels in Japan for the week of June 11-17, 2018
Special thanks to Zephyris for putting the list together!

10. 5,452 Copies Sold Saikyou no kanteishi tte dare no koto? – Manpuku gohan de isekai seikatsu 4
aka Who is the Strongest Appraiser?
No License for English

6. 8,577 Copies Sold A3! The Show Must go On!
Act! Addict! actors! and is originally a japanese mobile card collecting game

5. 8,713 Copies Sold Netoge no Yome wa onna no ko ja nai to ommota? lv.17
And you thought there is never a girl online?
https://www.novelupdates.com/series/netoge-no-yome-wa-onnanoko-ja-nai-to-omotta/

4. 8,990 Copies Sold One Piece novel A 2 shinsekaihen
The manga is licensed for English release by Viz. The most recent release was volume 86 in May.

2. 21,942 Copies Sold Sword Art Online Alternative Gungale Online VII
https://www.novelupdates.com/series/sword-art-online-alternative-gun-gale-online/
Series currently has an airing anime. It has been licensed for English release by Yen On. The first volume will release June 26. The series is written by Keiichi Sigsawa who is the author of Kino’s Journey. 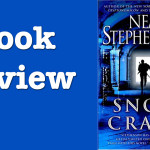 A book review on Neal Stephenson’s Cyberpunk novel, Snow Crash. This is a general review for the entire book with minimal spoilers (no worse than reading the book’s cover).

Snow Crash was nominated for both the British Science Fiction Award in 1993, and the Arthur C. Clarke Award in 1994.

December 26, 2012. The day after Christmas.
According to a variety of people who’ve dedicated books and movies to the subject, I shouldn’t be here. None of us should be. Despite them, the sun came up, and, for better or worse, the human race began another day.
Truth be told, taking emergency calls at my day job, listening to the misery visited upon people by stupidity, poor judgement, or acts of the universe beyond their control, it’s easy to be cynical and think it wouldn’t be so bad for the world to continue without us. But then, I’m also a father, and I’m glad the world is still here so my sons can grow and discover.
Apocalypse avoided (though I subscribe to the belief that there never was one, that the Mayans meant something entirely different). Perhaps it’s more important than ever to draw a slow breath and reflect on our year.
I could get political. I could talk about gun control, economic restraint, and putting aside petty rivalries so nations don’t come undone. I could mourn and cheer, cry and laugh, and no amount of any would be enough to sum up 2012. It’s the last time my generation will see the year, month, and day be the same number, and it’s the last scheduled apocalypse people have been fearing.
It’s the first year I made a resolution and put forth the effort to see it done. It’s the first year I looked in a mirror and thought that perhaps, after years of doubt and desire, I was a writer.
Writing isn’t just a hobby any longer, it’s also a responsibility. When I released my book, and people purchased it, I realized I’d made an unspoken pact with those wonderful people. I promised that I would continue to write and finish the story I asked them to become invested in. It gives writing added pressure, but also greater reward. My words aren’t just mine anymore, they belong to others, and that feels both wonderful and frightening.
I have similar feelings about this passing year. It was filled with fear, anger, and uncertainty. The year felt heavy and overburdened. Maybe it was the messages of doom or because the nations of the world were embroiled in changes of government and economies. I’m not sure. But the world didn’t end. Perhaps the universe, God, whatever you want to call it, made an unspoken pact with us. No sudden apocalypse, so we better do the best we can. We have time, we should stop wasting it. Our lives are each great stories, we should work hard to make them meaningful to satisfy our readers.
I hope 2013 is a turning point. I hope that if the Mayans had some sort of precognition, it was that they foresaw a shift in attitudes and a renewal of our world.
Dare to dream this year, and dare to chase those dreams. Let your words, thoughts, and deeds, belong to others.
On a separate, yet related, note, I want to say a heartfelt Thank You. It took almost three years to write, edit, and publish, Harbinger. In the past two months, almost a thousand people have picked up the book. Those who have taken the time to leave feedback have had many kind words to say. As 2012 draws to a close, one of my dreams is coming true. And it’s because of you wonderful people.
Thank you. I wish you peace, love, success, and dreams, for 2013.