In my past post concerning Child of Light, I gushed about how beautiful the game looked. The question I still had was, how would it play? Well, I’m here today to provide my promised feedback.

Child of Light is a fairy tale. It starts with a young duchess apparently dying, but then awakening in a magical land. She embarks on a journey to find a way home and in the process, save the land from an evil queen.

Yes, it’s like so many other fairy tales you’ve read. But even though the overall story is cliche, the assortment of characters you meet along the way, combined with the visuals and game play, make for a charming experience that will evoke warm childhood memories. 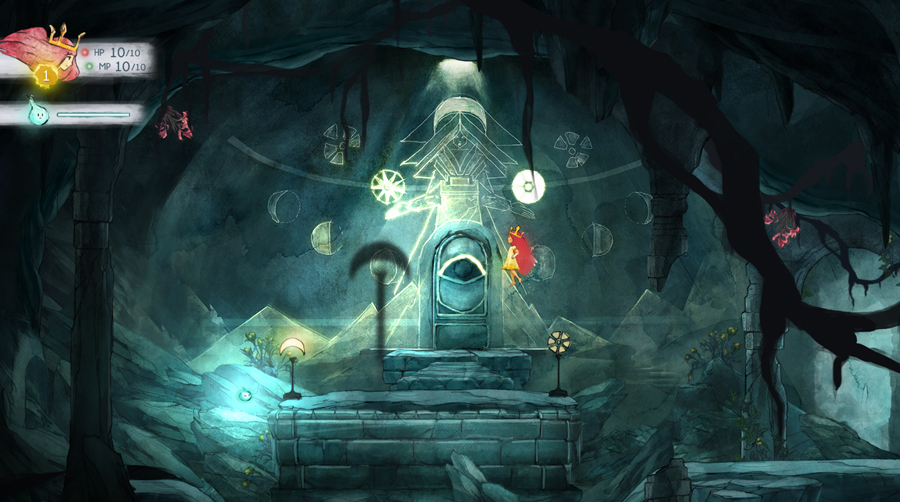 Beautiful. I mean, what else is there to say? The game looks like living water colour paintings right out of a children’s book. The character designs are unique and whimsical. There were numerous times I just sat and stared at the screen to enjoy the visuals. 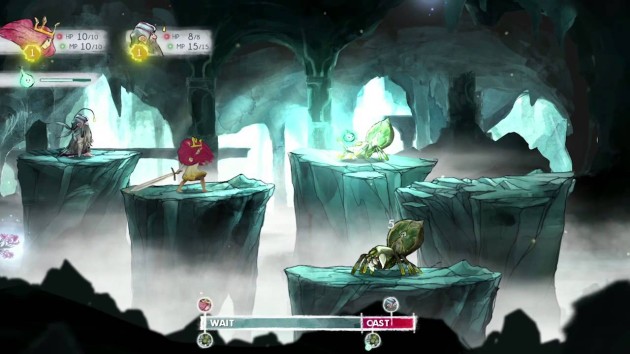 Regardless of the beauty and charm, if the game mechanics stink, the game would be a miserable experience. Thankfully, Child of Light delivers.

The game play is a mix of exploration ala sidescrollers of the past where certain obstacles had to be overcome with levers etc. (not to mention avoiding dangerous areas), combined with Japanese style RPG battles.

Enemies are present on screen as you explore. This allows you to avoid some, but the game levels your character as you progress, so it’s worth while to do battle. When you come into contact with an enemy, you are transported to a battle screen. You can have up to two characters on screen at any given moment. One thing I appreciated with the battle system is you can swap characters in your party anytime during the battle without penalty. If you’re familiar with the Active Time Battle system many RPGs employ, you’ll understand this. A bar along the bottom shows the time you have to wait before you can take action. Once you reach the “Cast” point, you choose what you want your character to do. Different actions take different amounts of time. This determines how fast your character travels through the Cast phase and then performs your selected task.

To complicate things (or make them more strategic) if an enemy strikes you during your Cast phase, it knocks you back on the ATB bar, meaning you have to wait longer before acting. You can do the same thing to your enemies if you hit them while they are in the Cast phase.

As if this didn’t add enough, there is also the ability to separately control your firefly companion during battle. He can perform actions such as slowing monster’s progress along the ATB bar and even healing your own party members.

The combat system is pretty simple and straightforward, but as you add new companions with different specialties, you can get very complex in how you play during the harder battles later in the game.

I mentioned above that your character gains levels. Not only do these increases grant you higher hit points, magic points, etc., they also give you points you can use on an ability tree. This allows you to learn new skills, or upgrade existing ones.

Also, you find items which can be used to permanently up character stats, healing potions, magic potions, etc.

Finally, you find gems which you can combine and then add to weapons, armor, and jewellery to give you other bonuses.

Worth every penny! The most fun I’ve had with a Japanese style RPG (which was made in Montreal, Canada, funny enough) in a long time. The various game systems are simple enough to not be frustrating, but still retain a level of complexity that harder core players can enjoy.

The graphics, story, and game play mesh into a wonderful experience. It took me about twelve hours to complete a play through on Easy (I think they’re renaming this ‘Casual’).

If you love RPGs, play this game. If it doesn’t sound like your thing, then at least Google Child of Light and look at the beautiful images 🙂