Resonance has been out for under two weeks and I’ve been really pleased by the results.

The coupons can be redeemed through the direct sales link on my website, or at Smashwords.

The coupons for Harbinger and Suture never expire, so you can use them for yourself and then share than with friends! The Resonance coupon is a limited time offer, expiring at the end of February, 2015.

The list only gets mail when there are big events or discounts. It won’t spam your email account or give your information to any other companies. 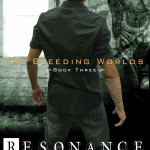 Book three of The Bleeding Worlds, Resonance, is finally here! I’m looking forward to hearing your thoughts on this one. Writing it was a tough battle. I can’t say why, but I struggled. At the same time, there’s plenty of things in this book I’m proud of.

Perhaps the hardest part was accepting it needed to live on its own, instead of being the final book. When I gave myself entirely to that realization, the book seemed to come together much faster.

Thank you for your patience. Hopefully, you won’t wait as long for the next one, as I’m already laying groundwork for Ragnarok. Some scenes are written, and I’m working with a new piece of software called Scapple to help plot the book before writing in earnest.

Until then, enjoy Resonance.

Looking for places to purchase The Bleeding Worlds, Book Three, Resonance? Go to the book page for links to a variety of retailers. 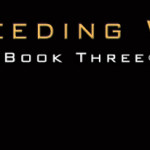 PreOrders for the third book in The Bleeding Worlds series, Resonance, are now live at Amazon.

If you preorder now, the eBook will be automatically delivered to your device on its release date of December 9, 2014.

I look forward to all of you being able to read this book and hearing your feedback. Here it is my dear readers, the cover for Resonance, Book Three of The Bleeding Worlds!

Pre-orders will begin via Amazon on Tuesday, October 14.

The novel will be officially released on Tuesday, December 9.

I hope you all enjoy!

In two weeks, the cover will be revealed and preorders will begin on Amazon. I don’t have a finalized release date right now, but I will when the preorder begins. I can say it will be in November.

And yes, that’s so much later than I had hoped and planned.

This book has proven very difficult to write. I can’t begin to explain why, because I’m not too sure of the answer. My thinking is it has more to do with me personally than it does the actual material. To be honest, the story has me pretty excited. It took me places I hadn’t originally planned for, but am very glad I discovered.

And as a little heads up, the cover will be entirely different from the original work in progress I posted earlier. When I decided to split the last book into two, I didn’t think the direction of the cover was correct, so that’s gone back to the drawing board too. I look forward to sharing the new, and finished, cover with you in two weeks.

Thanks for hanging in there. I know this one has had several delays, and I am entirely to blame. I can only hope when you finally have it in your hands you think it was worth the wait.

I’ve been fighting this for a while, but as Resonance quickly approaches the final word count of the previous two books, there’s no denying it any longer—there needs to be a fourth book.

This novel is about characters making themselves whole and finding their place in the traumatized universe Suture ended with. Those themes are starkly at odds with a large part of the remaining narrative which deserves only one title; Ragnarok.

My plan was to end The Bleeding Worlds with book three so I could move on to new stories. But I also promised myself, and all of you amazing readers, I would deliver the end the series deserves. In order to do that, and not make you all wait another six months, it only makes sense to let Resonance tell its own story and leave the rest for a fourth novel.

I hope you welcome this news with “That’s great, more to read!” as opposed to “I wish he’d just wrap this crap up.” I suppose the answer won’t be clear until you’ve all had the chance to read Resonance. I’m working toward an October release date. Yes, it’s later than I wanted. But I hope the extra time will produce an even better product.

Thank you all for continuing to support the series and being patient with me. I’ll have tangible results soon. 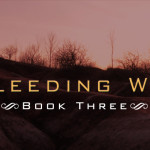 When I worked on Suture, I remained pretty quiet on the blog. So much so, a discussion topic popped up on Amazon asking about the release date. I thought, since I seem to be updating here a little more regularly, that I’d do at least a monthly post on the progress of The Bleeding Worlds Book Three, Resonance.

So far, my word count sits around 25,000 words. That’s approximately a third of Harbinger’s total word count. Not too shabby, right?

So why the Ugh?

This book will be the longest I’ve written.

Which I suppose is a good thing. Go out on a high note and all that, right?

So there’s quite a lot of writing left to do. I’ve set a pace for myself I’ve been meeting or surpassing every day, so steady progress is being made.

I refuse to rush this. I won’t let the end of my series fall flat on its face. I owe it, and you, more than that.

So there’s my update. If there’s any major breakthroughs in the next couple of weeks, I’ll let you know. Otherwise, I’ll see you in June 🙂